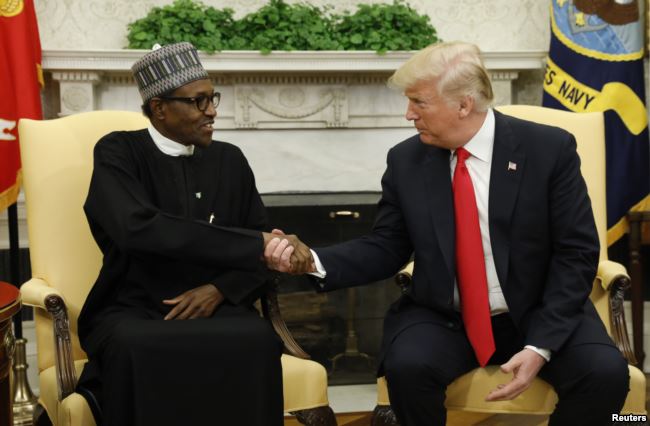 U.S. President Donald Trump attempted to reset his relationship with Africa on Monday, as he hosted Nigerian President Muhammadu Buhari.

U.S. President Donald Trump attempted to reset his relationship with Africa on Monday, as he hosted Nigerian President Muhammadu Buhari.

Buhari is the first sub-Saharan African leader to have a White House summit with Trump, who has been criticized for reportedly making derogatory comments about Africa.

During his public remarks with Buhari, Trump focused mostly on common goals and shared interests, such as fighting terrorism and expanding trade.

"We love helicopters — he loves them more than I do," joked Trump, referring to his administration's decision to approve a $600 million military sales deal to Nigeria.

Buhari thanked Trump for approving the deal, which the administration of former President Barack Obama had suspended over allegations of human rights abuses.

"I worked it out so that now you can buy the helicopters that you want," Trump said, adding, "We make the best military equipment in the world, and our friends can now buy it."

Human rights groups have accused the Nigerian military of torture, rape and extrajudicial killing in its almost decade-long campaign against the Boko Haram extremist group.

Tens of thousands of people have been killed in the insurgency, and hundreds of schoolgirls kidnapped, as the group gained notoriety and spread to neighboring countries, posing one of the most severe threats to West Africa's Sahel region in recent years.

Although Nigeria has been a major partner in the U.S. fight against Islamist extremists in Africa, relations have faced challenges over the past year.

Asked whether those comments came up during his private meeting with Trump, Buhari declined to comment.

"I'm very careful with what the press says about other than myself. I'm not sure about, you know, the validity or whether that allegation was true or not. So, the best thing for me is to keep quiet," Buhari said.

Trump then chimed in: "We didn't discuss it because the president knows me and where I'm coming from." He added, "And you do have some countries that are in very bad shape and very tough places."

Nigeria is Africa's most populous country and has a quickly growing economy. Buhari's trip is meant, in part, to secure more U.S. investment.

Trump said the U.S. "hopes to be the economic partner of choice for nations across the continent."

That comment was presumably aimed at China, which is currently the top investor in Nigeria.

But the U.S. leader stressed he wants the U.S.-Nigeria relationship to be based "on the principle of fairness and reciprocity."

"We give Nigeria well over $1 billion in aid every year, and we have already started talking to the president about taking down … the very substantial trade barriers," Trump said.

"We think we are owed that," he added.