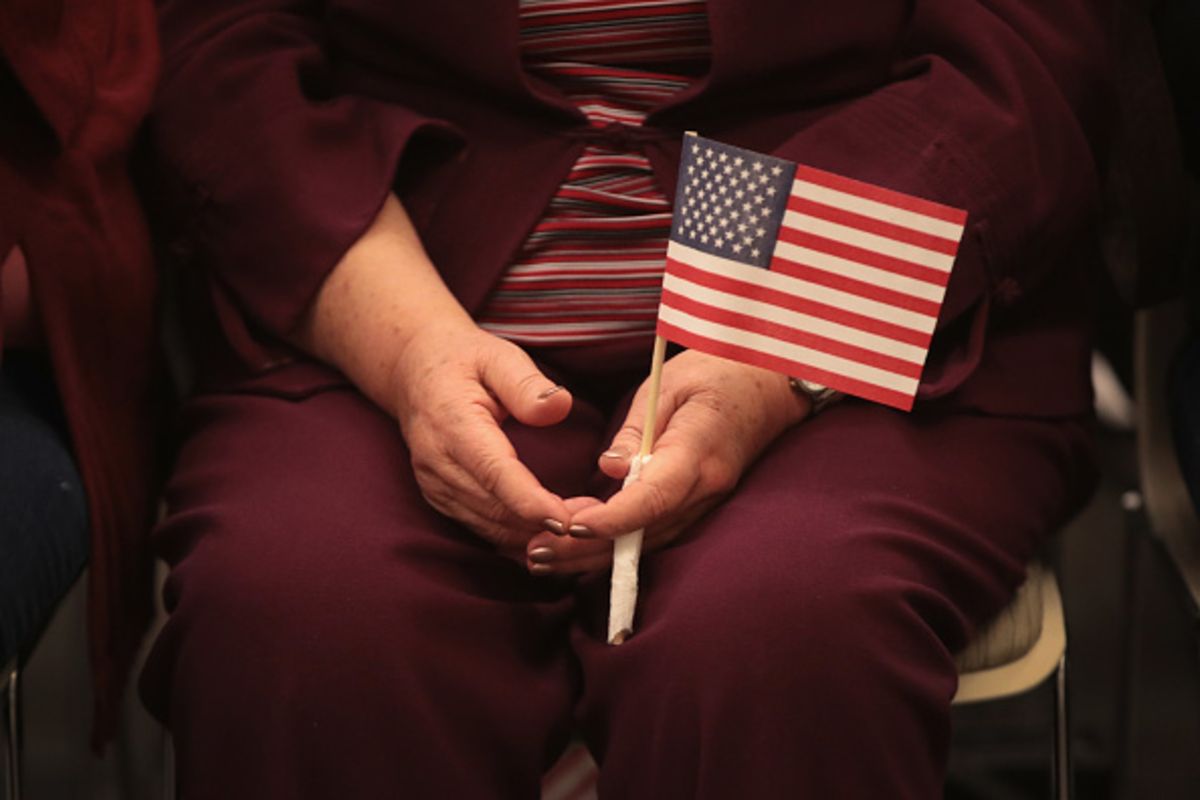 There are two main questions about President Donald Trump's recently issued immigration policies. First, is the administration embarking on a campaign of mass deportations of undocumented immigrants? Second, if so, why?

There are two main questions about President Donald Trump's recently issued immigration policies. First, is the administration embarking on a campaign of mass deportations of undocumented immigrants? Second, if so, why?

Trump's executive orders on border security and immigration require aggressive deportations, which are facilitated by loosening definitions of criminal behavior and making it easier to affix the "criminal" label to almost any undocumented immigrant.

Undocumented immigration is a risky business. From illegal border crossings to making fraudulent representations -- using a phony Social Security number, for example -- many undocumented immigrants improvise to survive. Somewhere along the line, most break a law -- even if it's by driving with a broken tail light. Under Trump's new orders, any such offense is grounds for deportation.

"We are charged with faithfully executing the laws of the United States and we will not exempt classes or categories of removable aliens from potential enforcement," he wrote. Indeed the only class of undocumented immigrants that is clearly exempt -- for now -- is the Dreamers, the fewer than 800,000 immigrants who came to the U.S. as children and registered with the federal government under President Barack Obama.

While Trump decides the fate of Dreamers, immigration agents have been explicitly authorized to pursue other undocumented immigrants wherever they live, work, travel or assemble.

"Department personnel may initiate enforcement actions against removable aliens encountered during the performance of their official duties," Kelly wrote. If no evidence of even a minor crime exists, ICE agents may use their own judgment in determining whether an immigrant is a threat to public safety and thus subject to removal. In addition, DHS intends to enlist local law enforcement to help with deportations.

The effects of these changes on enforcement promise to be stark. Indeed, White House press secretary Sean Spicer said Tuesday that the new policies would “take the shackles off” Immigration and Customs Enforcement and Border Patrol employees.

So we have a new policy that promises to identify millions of undocumented immigrants as criminals. We have memos from the head of DHS authorizing agents to remove all such criminals. We have new policies to make enforcement actions more aggressive and removals speedier. Finally, we have a direction from Kelly "to expeditiously hire 10,000 agents and officers, as well as additional operational and mission support and legal staff necessary to hire and support their activities."

Roughly 5,800 ICE employees are Enforcement and Removal Officers. Kelly's surge would take that number to almost 16,000, with still more staff to support their removal efforts.

There isn't much doubt about what this adds up to. Trump has laid the legal basis for mass deportations, and Kelly has organized his department to conduct them. In addition, he seeks a drastically larger deportation force, the purpose of which can only be more deportations.

Speaker of the House Paul Ryan told a town hall in January that "if you're worried about, you know, some deportation force coming, knocking on your door this year, don't worry about that."

Not everyone in the audience was reassured. Because Trump had explicitly promised to deliver pain to undocumented immigrants, Ryan was pressed on the issue again. "Everybody thinks that there's some deportation force that's being assembled," Ryan responded. "That's not happening."

Implicit in Ryan's denial was the notion that a deportation force was too pointless, too arbitrary, too ugly, too thuggish for any responsible American leader to undertake. That was Jan. 12. Yet here we are.

Congress has not yet funded additional ICE agents. But even without a bigger force, deportations are poised to proceed at a rapid pace, and the targets will be arbitrary. The fear and uncertainty that arbitrary detention and deportation breeds will likely add high numbers of "self-deportations" to the growing numbers of forced deportations.

Most undocumented immigrants have lived in the U.S. for more than a decade. Several million have U.S.-born children. Others have American spouses. According to the Migration Policy Institute, about 87 percent of the undocumented population were not priorities for deportation under the Barack Obama administration's 2014 guidelines.

There are fewer undocumented immigrants in the U.S. today than when Obama was elected president in 2008. Mexico, historically the largest source of undocumented immigrants, is growing older and wealthier, sending fewer people abroad in search of work. The flow of illegal immigration has slowed significantly. As my colleague Noah Smith wrote, if there ever was an immigration crisis in the U.S., it is over.

There are legitimate questions about immigrants using illegal crossings or visa overstays to gain relative advantage over others who wait in a backlogged system. Likewise, blocking illegal immigration altogether is an impossible but understandable goal. But what is achieved by deporting millions of settled immigrants already on the inside, most of whom are integrated into families, communities and economies? (Relationships aside, the disruption to labor and housing markets is significant.) What public goal does mass deportation achieve?

During his presidential campaign, Trump said that the number of undocumented immigrants in the U.S. is far larger than the 11 million or so cited by the U.S. government and by experts at both liberal and conservative immigration groups. "I am now hearing it's 30 million, it could be 34 million, which is a much bigger problem," he said.

He repeatedly highlighted violent crime committed by immigrants, and even opened his campaign by calling Mexicans "rapists."

Trump's falsehoods and exaggerations always have a point, even if it's only self-aggrandizement or petty score settling. He hypes the numbers and dangers associated with immigrants because he wants Americans to fear the immigrants who live here, just as he wants Americans to fear the Muslim refugees seeking safety here. Meanwhile, Trump's purported reverence for "law and order" is laughably situational.

Demagogy is always frightening. But like its local variant, bullying, it's also boring and predictable. Trump sows fear and division routinely, because he benefits from directing his supporters' attention toward enemies.

He may benefit from scapegoating immigrants, but the U.S. will not. Businesses will suffer. Wealth will be lost. The character of the nation will be challenged, and likely sullied.

It's important to keep in mind, as the deportations ramp up in the months ahead, the families and lives that will be destroyed. It's equally important to remember why: not for national security, not in pursuit of law and order, not because the American public demands it, but simply because an insecure president is desperate to appear "strong," and undocumented immigrants are easily bullied.