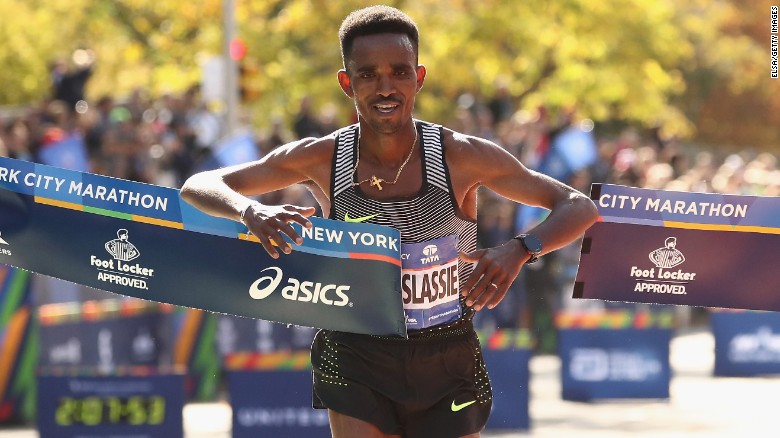 The New York City Marathon crowned its youngest male champion on Sunday. Ghirmay Ghebreslassie, 20, from Eritrea finished the five-borough race in 2 hours, 7 minutes and 51 seconds, qualifying him as the third fastest runner in the marathon's 46-year history.

The New York City Marathon crowned its youngest male champion on Sunday. Ghirmay Ghebreslassie, 20, from Eritrea finished the five-borough race in 2 hours, 7 minutes and 51 seconds, qualifying him as the third fastest runner in the marathon's 46-year history.

"Nobody has won any major marathon from Eritrea," Ghebreslassie said at the New York City Marathon Press Conference. "I'm really proud of it."
Mary Keitany, 34, of Kenya finished first in the woman's division, clocking in at 2 hours 24 minutes 26 seconds. It is her third consecutive victory at the United States' largest marathon.
Previously, the youngest male winners of the marathon were Americans Alberto Salazar in 1980, Tom Fleming in 1973, and Sheldon Karlin in 1972, who all won first place at age 22. Beth Bonner, also an American, is still the marathon's youngest winner, placing first in 1971 at age 19.
Ghebreslassie finished 62 seconds faster than second-place winner Lucas Rotich, 26, of Kenya. Ghebreslassie and Rotich were helping each other along the way until Ghebreslassie began to break away at mile 16.

"Today was his," Rotich said at a press conference after the event. "He was stronger than me."
This is not the first time Ghebreslassie has broken records as a young athlete. In 2015, he became the youngest winner of a road event at the International Association of Athletics Federations World Championships, according to IAAF's website.
Ghebreslassie said the wind was the toughest part of Sunday's race, but said confidence was the only way to overcome that obstacle.
"In order to achieve what you need during the race and before you must have full confidence," he said. "If you lose your confidence [it] means you are hopeless. If you lose your hope, you can't do anything."
Somali-born American runner Abdi Abdirahman, who is 18 years older than Ghebreslassie, placed third in 2 hours, 11 minutes and 23 seconds, making him the oldest top three male finisher.
The marathon's oldest winners are Miki Gorman of the United States who won in 1977, and Priscilla Welch of Great Britain, who won in 1987. Both were 42 years old at the time of their victories.
Abdirahman moved to third place right before the 36K.
"I didn't think I was going to finish third," Abdirahman said at the press conference. "I thought I might finish fifth, sixth or seventh."
Abdirahman made the New York City Marathon his goal after suffering an injury that made him unable to compete at the Olympic trials. He told his manager he would treat this marathon as his own Olympic trials.
"Age is just a number to me," Abdirahman said at the press conference. "I kind of look at it as an advantage because I knew the course and I've run it and I've been around a long time."